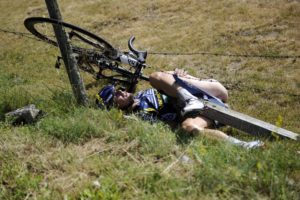 One of the breakaway men, Netherland’s Johnny Hoogerland, is seen after he crashed and landed in a fence at the side of the road during the 208 km and ninth stage of the 2011 Tour de France cycling race run between Issoire and Saint-Flour, center rance, on July 10, 2011. Spain’s Juan Antonio Flecha and Hoogerland survived being hit at speed by a car which bore the marking of France Televisions. AFP PHOTO / LIONEL BONAVENTURE (Photo credit should read LIONEL BONAVENTURE/AFP/Getty Images)